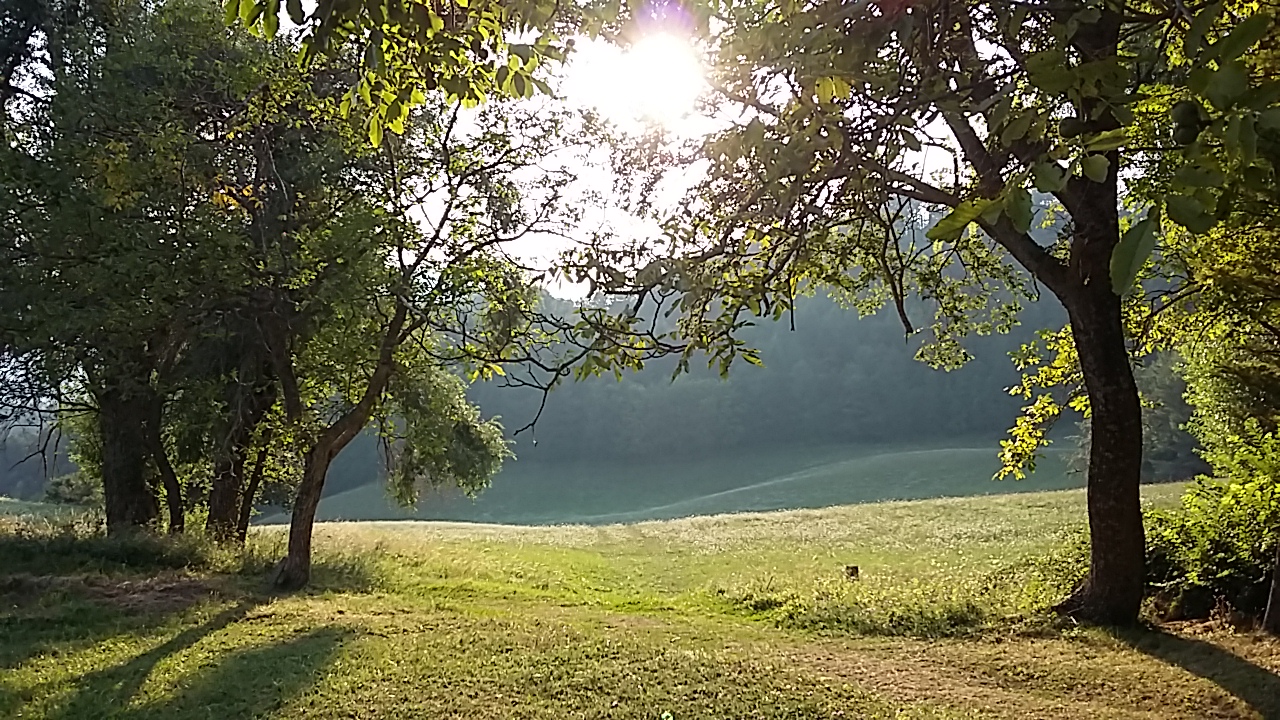 There is a field

Out beyond ideas of wrongdoing

and rightdoing there is a field.

I’ll meet you there.

When the soul lies down in that grass

the world is too full to talk about.

People frequently ask us about our children’s education. Their questions often include the subcontext of their own opinions on the subject:

“Considering the ‘current situation,’ don’t you worry about the compromises forced on your children at school?”

“You live so far out in the country, don’t you worry your kids will be out of touch with their peers?”

General agreement that battle lines are drawn, that our children, our values, and everything we hold dear are at risk appears to be the last universal truth.  Amid this discourse, I often hear nostalgic, almost wistful invocations of some ideal space of unity, understanding, agreement. The field.  No matter how we view the current world situation, we all somehow wish things could be simpler, less fraught.  The trouble, as I see it, with letting our imaginations run to this idealized field is ignoring the journey needed to make it there.

Shortly before our youngest son’s first “family assembly” of the year, we received a message in the parent’s group chat (a whole other post could be written on the ethnographic contours of these spaces) informing us that the village kindergarten theme for the year would be “Indians.” The idea was that the children would be led through a series of activities based on a story about missing golden feathers in an Indian chief’s war bonnet.The kids would be invited to search for the missing feathers by forming tribes, riding horses, building campfires, shooting arrows, and walking barefoot through the park. I cringed.

I frequently struggle to explain to Italians what they misunderstand about the United States. Because I’m not from Syria or Cameroon, this task is rarely about confronting direct racism and xenophobia and usually is more about letting them down on all the romanticized misconceptions they have from TV and movies. Homelessness, McDonaldization and genocide are generally unpopular subjects of discussion.

When my son’s teachers proposed this activity, I wasn’t sure exactly where the conversation would go. During the family assembly, Federica and I tried to bring up the fact that we liked many of the proposed activities but we did not like the idea of appropriating cultures for entertainment. While I recognize this kind of conversation has been much more present in the US lately, it is not common here in Italy. We shared that Native American peoples are not some single, romantic myth of the past but real and diverse people still alive today. Improvising with little preparation, we suggested that much of what they proposed could be done while pretending to be gnomes or fairies rather than a two-dimensional version of Spaghetti-Western “Indians.” Indeed, the teacher’s first reaction to our comments was a very heartfelt “we in no way want to offend or disparage native people but we want to celebrate them.” We were speaking two completely different languages. My takeaway from the assembly, after this response by the teachers and some less than encouraging comments from other parents, was that our words had not landed and this would go nowhere.

I was completely surprised when we received a message from the teacher a few days later saying she had continued to think about what we’d shared and she wanted to talk with us more. She said she really wanted to understand our perspective. So despite it being a really busy week, we found a moment to

Canoes at Journey 2012 hosted by the Squaxin Island Tribe

speak with her and genuinely appreciated her openness. What followed was a very interesting conversation, where we shared about our experiences coming from the United States and working in Indian Country. We shared that the Native people still living in the territory where our son was born did not historically wear feather headdresses or hunt buffalo on horseback but instead wore clothes to protect them from the rain and fished from boats in Puget Sound…as they still did today despite generations of marginalization.  She shared her genuine curiosity about Native America and also clearly felt unsure about how to incorporate what we said into a curriculum for kindergarteners. We told her we definitely weren’t experts on all Native peoples or early childhood education, but that we would offer to take time to educate ourselves and look for resources to share while repeating the request that she could change the overall theme of the activities to avoid misrepresenting cultures none of us were qualified to teach about. Once again, after this conversation I did not know where we might have arrived but I was preparing myself for disappointment.

We just received word that they did change the theme of the activities, and that they will not be using “Indians” as the backdrop of the curriculum.

I must admit, I am not sure if we reached the field on this. I do feel more acknowledged in my perspective and place of origin than I usually do and I also recognize how skeptical I was that opinions or perspectives could change. I feel really influenced by general discouragement in this moment, and yet I think I should feel appreciative of some compromise. I wonder how much each of us were changed by this experience, and perhaps indeed what I must do is allow my soul to lie in the grass, despite my judgements and frustration, and find that world that is too full to talk about.

4 thoughts on “There is a field, but where?”