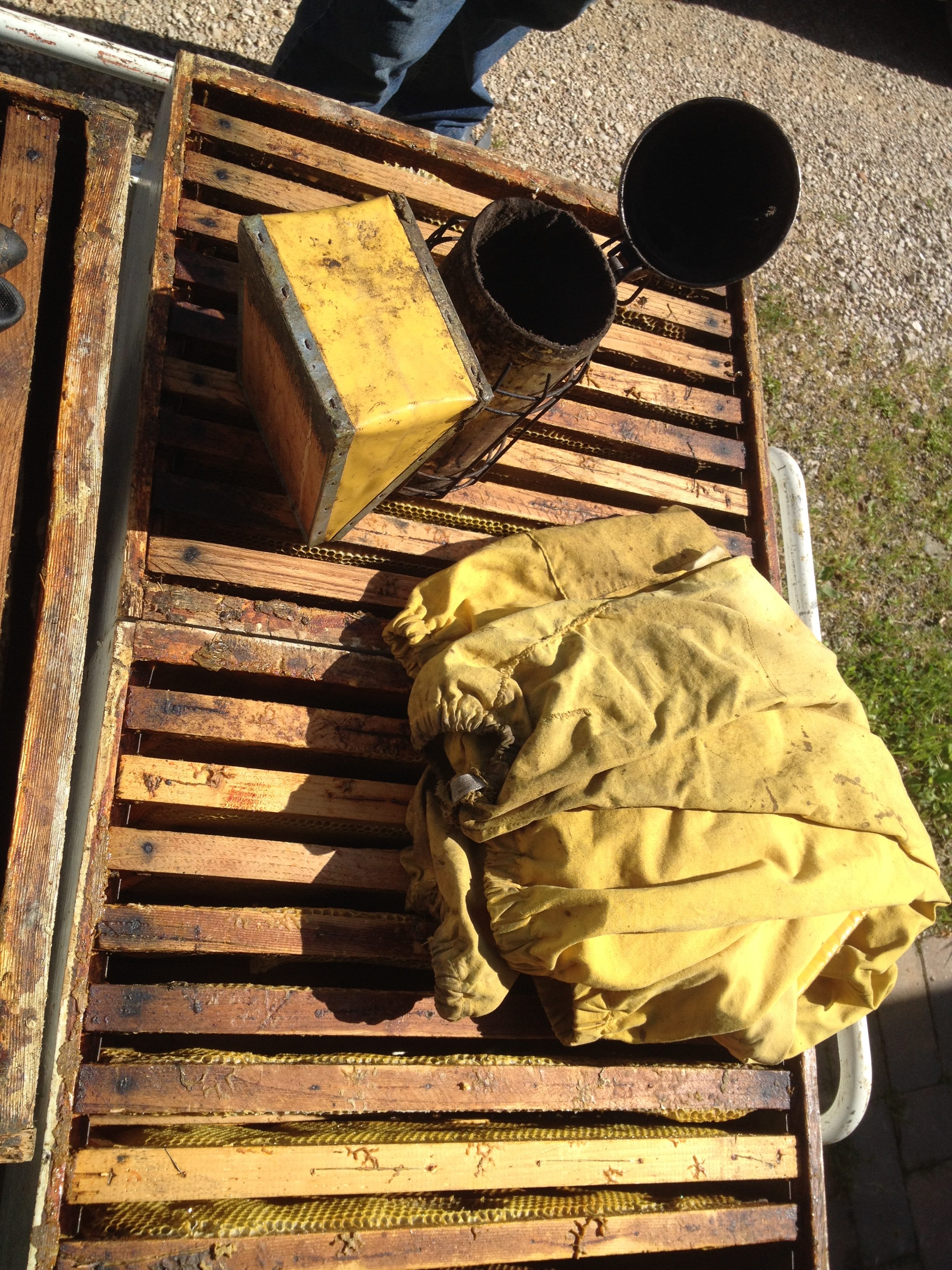 Autumn repays the earth the leaves which summer lent it. -Georg Christoph Lichtenberg

I geared up the other day to check in on the bees.  As I’ve spent more time with them this year, I’ve begun to really fancy them, and fancy myself on the pathway into beekeeping’s inner circle. Honestly I just wish I’d already arrived. You know that feeling? I’m getting closer to some “lifers,” and the romance of their skin studded with welts, their certain taciturn stoicism, and their mystic communion with insects is heavy.  We could get psychoanalytical about it, but for now let’s just stick to my open admission that I’m confronting the interplay between my love of the idea of being a beekeeper and the love of the bees themselves. As for the bees, I now recognize differences in the sounds they make when annoyed or contented, I can spot queens better than ever before, and I even recognize the sweet sour smell of their alarm pheromones when they are disturbed.

So this particular day, I was gearing up in the first days of fall to check in on their food stores and progress of their mite treatment.  It’s been such a busy summer as we’ve scrambled to recover (somewhat) from all the lost business in the Spring so I’ve not gone to them as often as I’d have liked.  During lockdown, they were hard at work producing 100 kilos (about 220 pounds) of the clear, very sweet acacia honey from the first trees to bloom in the Spring. In the same time period, Federica and I just tried to get our bearings.  From June through the end of August, we both worked incredibly hard, they in their own way and we in whatever way we could.  Federica organized two summer camps as lockdown ended in June and July, responding to the wave of requests for outdoor experiences for kids after months of closure.  We did almost all activities outside in the open and new measures in place to check temperatures, maintain social distance and wear masks when in closer contact.

Our first summer camp was for kids in our valley, a day camp shared with another local farm where kids rode horses, crafted things like a cornhole set (a big hit!) and jumped in the pool.  Then we hosted a really intense two weeks of live-in camp in partnership with an Institute for the Blind in Bologna.  This camp was fascinating, as kids from all over the region with various degrees of vision explored the farm, did labs with us and taught us all kinds of things about their worlds.  With these kids we made beeswax candles and talked about the bees, and I reflected on how much bees communicate with each other in the darkness of the hive using the movement of their bodies. As that camp drew to a close, we were flooded with requests from Italians (mostly from the COVID-19 epicenter Lombardy region) wanting to come stay during their vacations or volunteer or learn more about us.

We were exhausted by this time, and in fact Federica contracted Lyme disease from a tick bite which floored her even further.  I’m sorry to say that also in this period, our collaboration with Cambio di Marea came to an end. Lockdown and changes in their group had a big impact on all of us, but it became clear at this time that they were focused on external ideas and projects rather than being in practical collaboration with us here. It was painful to spend so much time working to resolve differences and find a way forward with them when ultimately they clearly wanted something else and struggling to admit it to themselves and us.

I reflect on how the bees naturally grow and nurse new queens periodically to split their families and allow swarms to break off and form new colonies elsewhere.  I doubt they feel pain about this natural cycle of ebb and flow, though a newly divided hive will not produce as much honey as it adjusts to the transition. In any case, at summer’s end we harvested another 80 kilos of honey (including from two new families I’d captured as swarms in the Spring), Beatrice and Stefano moved their tiny house away and Federica and I took stock of our situation.  Maurizio, a former agriturismo owner, and Luca, a former housemate at the House of Peace, had joined us over the summer as volunteers and we are now reconstituting ourselves with their help and participation.

As I finally found a moment to visit the bees as our kids return to school and tourists returned home, I found them agitated and defensive.  My personal insecurities and concerns about our future swirled around me as the bees whipped against my mask and gloves in defense of their homes.  “I’m not trying to hurt you!” I tried to say, but indeed the separation of my body and mind right now exposes the fragility of my intentions.  They do not suffer insincerity.  Rising temperatures, invasive mites, even the way we have forced them to live in square boxes near the ground are all stresses which don’t kill them outright but push them to live outside their comfort zones. As I also live so far outside my comfort zone, how do I stay true to my own natures?

Worldwide, I think all of us have known on some level that big changes where coming as the climate changes, political systems unravel and our global interconnectivity is ever clearer.  This great turning, as Joanna Macy calls it, will not always be easy or linear and I do believe we must be true to our deeper natures as we face it together. We’ve had to become much more honest, more quickly than we’d expected in these last months. I must admit I have much further to go on my path to beekeeper initiate, but I will say that every time I visit the hives I am challenged to draw on the patience, humility and discipline I know I need to adapt and grow.

One thought on “The Leaves the Summer Lent”