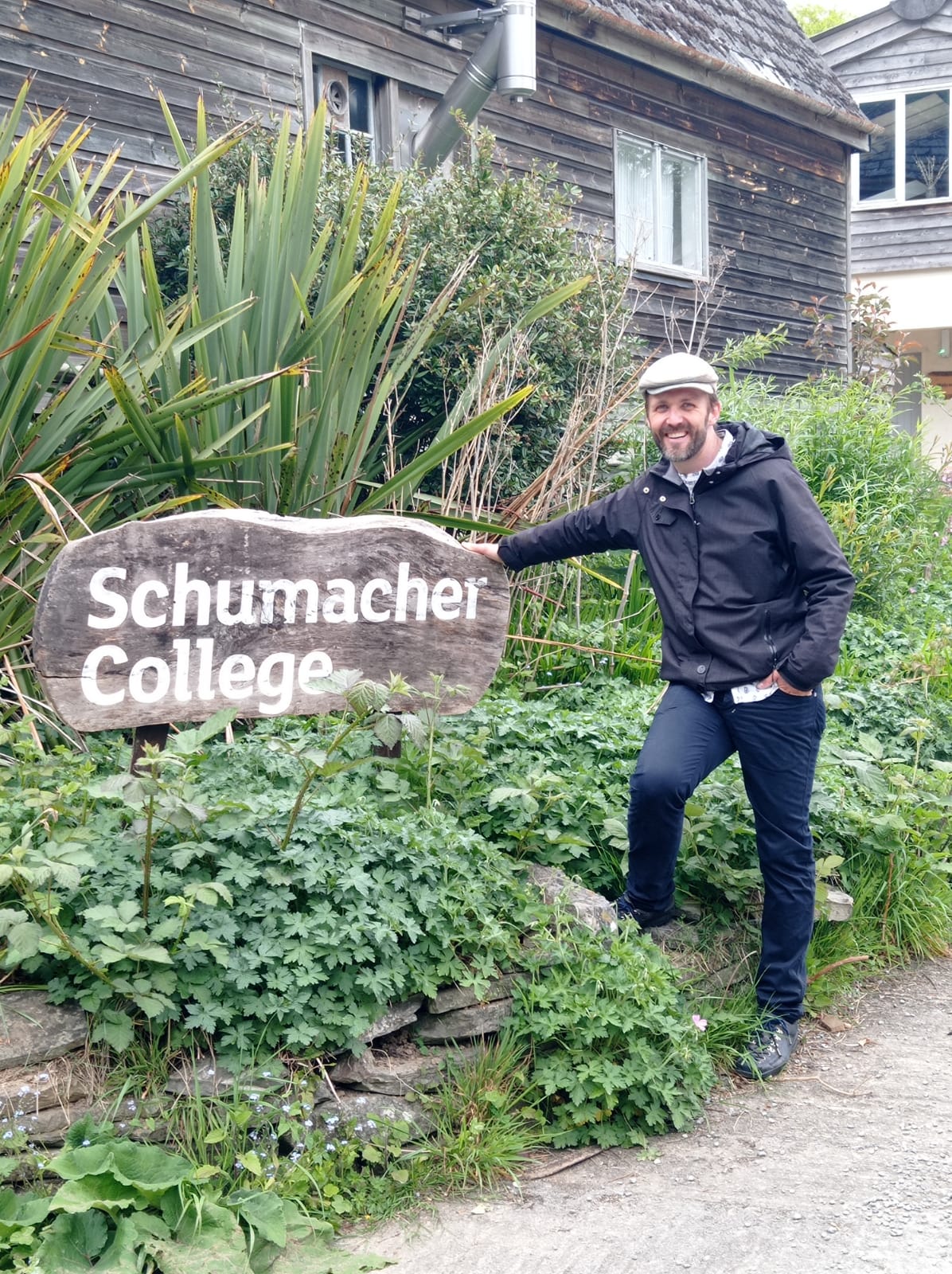 Kate Rudd is a Masters in Regenerative Economics student at Schumacher College. She visited us for a week as part of her dissertation research and wrote the following reflections we’re reposting here. The original articles are on Medium, entitled “Farm Life” and “What do farmers and activists have in common…?”

Today I arrived at Borgo Basino — a farm school and ecovillage based in the Italian region of Emilia-Romagna. My hosts, Evan and Fede, are farmers, researchers and activists, whose vision is to create ‘a new model of multifunctional, global healing’ through knowledge, connection with others, and networks of regenerative sustainability.

Although I come from Lincolnshire — an English county that is famed for little other than its flat, fertile farmland — I’ve always been a city dweller and had barely set foot on a farm before this year. Little did I know, when I embarked on a Master’s in Regenerative Economics at Schumacher College, that it would lead me back to the land…

In the Master’s course, we’ve grappled with some serious questions: how to face the converging crises of climate change, poverty, conflict, backsliding democracy, mass migration, social injustice, biodiversity loss, to name a few. We’ve also explored alternative economic models and news ways of organising, learned how to think more critically and systemically, and how to show up, take action and relate to ourselves and others in a different way.

Many of us came to Schumacher searching for answers — how to address the climate emergency, how to subvert the hegemony of ‘the system’, or how to make the world a better place for future generations? While the ‘answers’ to these these wicked problems have remained elusive, we’ve learned how to navigate their complexity and how to dream, innovate and co-create pathways for change.

One of the pathways for change that captured my attention was the work being done by a growing number of farmers and growers across the planet, who are practising what I’m going to call ‘deeply regenerative agriculture’. By this I mean, people like Evan and Fede, who are working not only to heal the land but also the people who live it, by regenerating communities and helping individuals to find a sense of connection, agency and hope. The underlying premise of this work is that by creating an environment where people can re-learn how to live in harmony with nature, with each other and with themselves, it is possible to have a truly regenerative impact on multiple levels — think: a flourishing local economy, better food security, increased biodiversity, human health and wellbeing.

But are these outcomes really possible? If so, what exactly does it take to achieve them, and how can they be scaled? That is what I intend to find out in my latest piece of research in which I’ll be looking at a series of projects in Europe, Africa and Latin America that are putting the philosophy of deeply regenerative agriculture into practice. The first stop on this journey is Borgo Basino —

What do farmers and activists have in common…?

One thing that has struck me since I arrived at Borgo Basino, is just how hard everyone here works to make this dream a reality.

The breathtaking beauty of the setting and the warm, hospitable welcome that awaits guests don’t just happen by magic — running an agricultural business and ecovillage takes backbreaking work and tireless commitment. It’s a far cry from the idyllic, slow-paced country living featured every month in the back of Vogue.

So what is behind this striving? According to Borgo Basino co-founder and fellow Schumacher student, Evan, it’s the desire to ‘be of service’ and ‘create something of bigger benefit to other people’ through building a community and, ultimately, a wider territorial network.

Evan was born in an intentional community in the Oregon Coast Range which, he says, has influenced this vision: ‘Over the course of my life, I’ve sought out community situations’. But the real ‘inspiration’ came from his wife, Federica, who was engaged in activism in Palestine when the two met. They recognised that it can be hard for people returning from intense projects and situations, such as work in conflict zones, to re-adjust to life back at home: ‘we know after one does something that intense it can be very difficult to accept “normal” life afterwards’. So, at Borgo Basino they decided to create a space to ‘support people in transition’ to recover financially and emotionally from their experience and to translate the skills they had learned in the field into something new. ‘For me, this sort of marriage of inner transformation — working on our personal work — but also with the practical application of those skills was really key’.

Underlying this desire to help activists is a clear need. Evan is candid about the challenges humanity is facing: ‘If we genuinely hope to bring effective change, we need tools to keep ourselves sustained in that: support — not just self care — to keep ourselves motivated, to keep ourselves feeling like it’s possible and optimistic. And I think we’re facing pretty grave, global circumstances at the moment. And so I think that’ll only increasingly be important’.

For Evan, community is a pathway for change because supporting the kind of regeneration that’s needed cannot be done in isolation. ‘We get a lot of people that come to us asking: are you self-sufficient? And are you off the grid? There’s a lot of this emphasis on retreating from society. But that’s definitely not our impulse. There are a lot of folks that don’t have the opportunity to imagine themselves living in a community context. And so, in order to make that even a possibility, we need to extend our models and our ideas and whatever in a way that’s of practical relevance beyond just our own backyard.’

But how can this be achieved? ‘I think we need to redefine our definitions for measuring progress and things of that kind’, says Evan. His hope is ‘not to create a higher GDP, even for the surrounding area, so much as a better quality of life — not just for those that live here, but for those around us, you know, human and non-human.’ He notes that it can be particularly challenging for people to build new models for approaching things, such as community life, ‘because we don’t necessarily have an idea of what we’re aiming for’ and ‘if we’ve never felt it, how do we then know whether we’ve reached it or not?’.

With that in mind, Borgo Basino is seeking to bring a new approach to one thing that most of us can relate to — family life: ‘You know, we are multigenerational, family-heavy project so far, still. And we’ll see with time how much further that that family feel can extend to others who come.’

It strikes me that while they’re no longer living in a conflict zone or officially involved in activism as some would define it, in extending these models and ideas out into the world by welcoming the world into their family circle, Evan and Federica are continuing to practise a delicate activism — understanding that their way of seeing is the change they want to see.