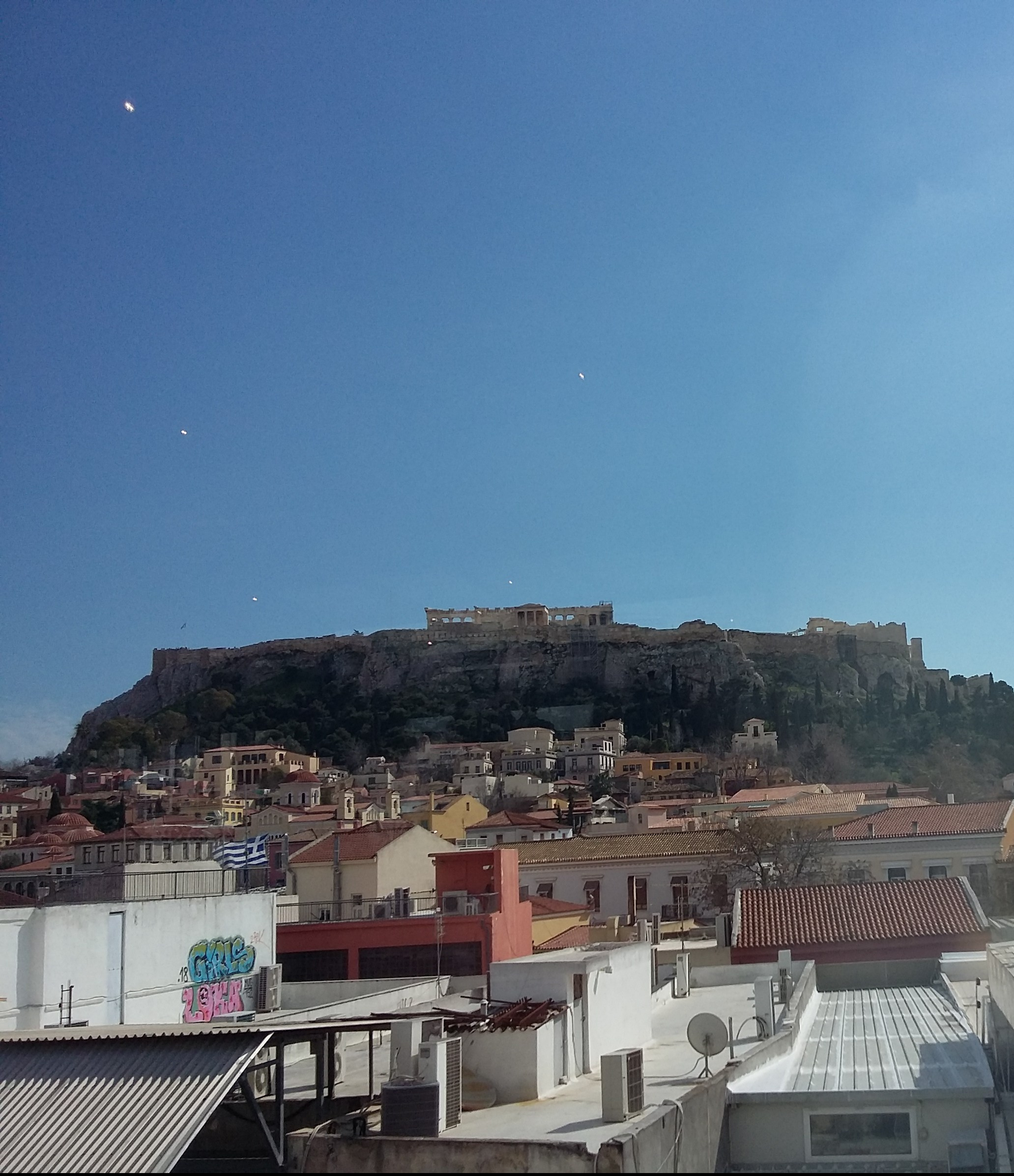 I don’t often dine beside the Parthenon, but as I stared at it this particular time, something felt familiar. I was leading a group of American students from my new part time job on a study tour of Greece for Spring Break. By this time we’d had several meals while gazing on the acropolis from different angles, it’s true, but there was more to it than that.

The whole visit seemed out of place at first, leaving the farm and my family to take 17 Americans around a country I’d never considered visiting before this job. In fact, I’ve been schlepping down to the Bologna twice a week for a few months now to immerse myself in this small US enclave, and that alone was a big mental jump. My work there focuses on helping integrate migrants and marginalized students living in Bologna into classes with the Americans, and also supporting the social justice mission of the travel program.

My family began taking me on trips like this when I was about these student’s age. I remember, especially at that age, feeling embarrassed to be associated with other Americans, worst of all my family.  As I sat at this particular lunch surrounded by my students and this view, their reactions to the food and the atmosphere suddenly made something click for me. I’d happened to sit next to a few students who were especially grateful to be on this kind of trip at all, and compared each new dish or flavor to some past experience of home.

“Wow, this dish reminds me of stealing fried green tomatoes from my grandmother’s kitchen counter!”

“The best part about this meal is that it’s as good as home cooking without the commentary on my weight!”

I suddenly felt really grateful myself to be here with them. Seeing this experience through their eyes, I imagined their own families far away. When they asked me about the best meals I’d ever had or the favorite places I’d ever traveled, I wasn’t prepared for the appreciation that welled up and blurred the contours of my memories.  I could only think about my own family, so spread out around the world. I thought about the trips I’d taken with them but mostly I thought about my home(s), the one in Italy and in the Pacific Northwest and even Istanbul and Greensboro. I was happy to think about the long path that had lead to where I sat that day as a series of expanding base camps rather than a endless trek into the unknown.  The many travels I’d taken had actually lead meeting and creating fixed points where I knew people really cared for and held me, all over the world.

I also thought especially about my trips to Turkey and Palestine, where the people I met had at first felt very “other.” The call to prayer, covered heads and room temperature meals where new and strange at first but had become familiar, even comfortable to me over the years. I had family there. Now I was trotting around Greece, “the cradle of civilization,” and we were talking about things like the “birth of democracy.” Though the food and landscape were familiar, I realized I was comparing it to the “other” places that I knew and loved so much better. Rather than feeling torn, I somehow felt more complete.  While I know Greece and Turkey have been locked in cold war for generations, I took my cue from the street that didn’t trouble itself with these issues. This very restaurant actually had a “sister” next door that served the Turkish versions of the dishes we were eating that day. It’s name? “Misafir,” which means guest or traveler in Turkish.

Feeling some kind of detached contentment, my gaze shifted down the table to rest on another member of the group who was clearly not in good shape.  She was pale and had barely touched her food. Suddenly I snapped back into “staff mode” and asked her what was up.  She admitted she wasn’t feeling well and hadn’t been comfortable since the previous evening.  As I walked her back to the hotel, I learned she probably had a fever she’d been staving off with Tylenol (and no thermometer) for hours. Why hadn’t she said anything?

Suddenly more recent memories overwhelmed my thoughts.  At the farm, we’d spent the better part of February and early March passing through waves of contagious illnesses. Fevers collapsing into coughs, breaking out in rashes. We were all drained physically and emotionally by that point, and as I prepared to take this Greece trip I actually began another consulting contract with a client in New York. I’d felt responsible for keeping a lot of balls in the air as suddenly Federica, who’s such a pillar of support, was laid low.  It’s the sickest we’ve all been so far as a family of four, and it had left its mark on my psyche.  Now the thought of this student, potentially contagious but suffering in secret, sent me into a bit of a panic. What if the whole group caught what she had now?  Was I suddenly going to have to lead a new batch of patients through a country in a language I didn’t understand?  (When the treatment we finally settled on was appealing to a pharmacist to prescribe antibiotics without so much as a temperature check, I can’t say I was entirely reassured)

In the end, I returned to my family much more appreciative and without any noticeable signs of contagion.  I was a little more capable of including this new job, as incongruous as it might have first felt, into the story of our lives here and indeed my whole life so far.

Here’s another amazing person I met along the way in Greece:

Thomas, a seed enthusiast, stone artisan, honey collector, and wine maker in the village of Karyes, Greece. Honored to meet people like him who are firmly rooted while branching out to cross pollinate a regenerative future. ευχαριστώ pic.twitter.com/mIevH02HiY