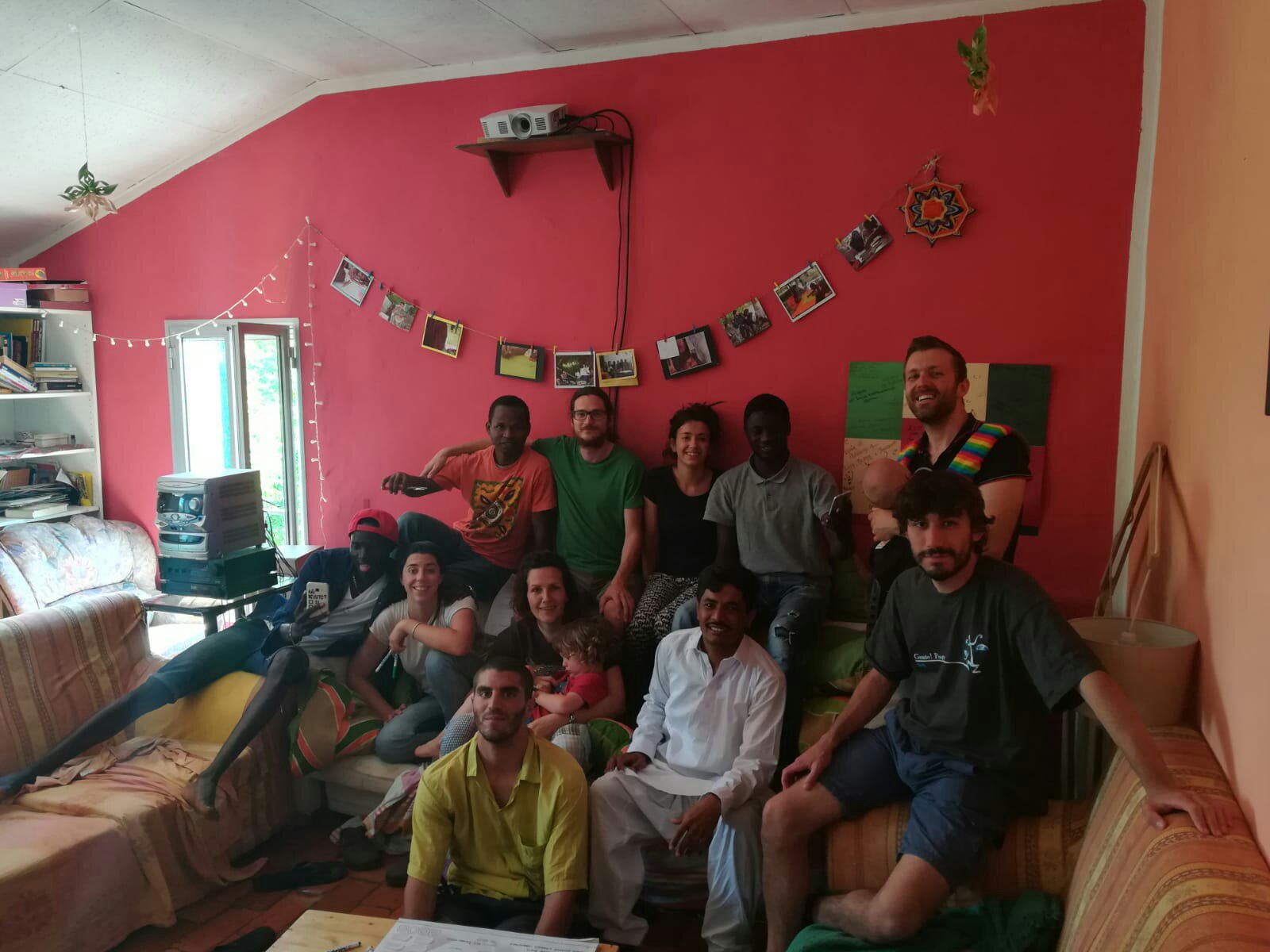 It’s impressively optimistic to name a home “House of Peace.” Even the smallest inter-personal conflicts can disrupt a harmonious atmosphere, and I’m always impressed with groups of people who attempt to live together in community. Having watched a local commune in Oregon for years, as it swelled and diminished, observing the innate power structure, I will be interested in hearing how your international community functions, who the long-term nucleus are, how long individuals stay, what causes schism, how it is mended. -Tina

When I saw this message I immediately thought about the bigger implications of each of these questions, beyond the confines of our house but also related to them.  So here are my answers, placed in a larger context.

All across Italy, the majority of people who live most intimately with immigrants are other immigrants and Italian young people, many of them driven by idealism but also by the fact it’s a challenging, poorly compensated work. Many asylum seekers live in pretty substandard living conditions, locked in hotels or empty buildings with occasional check-ins by staff.  The house where we live aspires to be an alternative, attempting to put everyone on a equal level living together and dividing responsibilities for cooking, cleaning, house meetings, etc. among the young Italians, Africans, Pakistani and North American living here.  The “function” is a bit tricky though, because the expectation and cultural context of Italians as the hosts and immigrants as the served is not so easily reinvented.  Language barriers, differing cultural norms, unchallenged gender roles and power imbalances remain in place here and throughout Italy.

2. Who is the long-term nucleus?

Our house was founded by three young people returning from year-long periods of civil-service with the Pope John XXIII Community abroad.  They aspired to carry on their work of peacebuilding and cross-cultural bridge building as they returned home to Italy, which was of course an inspiration to Federica and I as we’ve had similar dreams.  One of the challenges more generally with this kind of project is how to sustain it though.  It’s very taxing to live day in and day out sifting through both the standard bureaucracies of everyday life along with the exceptional ones related to immigration “systems” in this country.  This is why almost two years ago we hosted the Helping the Helpers project for folks working with asylum seekers. We wanted to help folks sustain this kind of work long term to support the welcoming network without burning out. We’re excited that this project has been picked up by the Quaker Council for European Affairs and will run again for a full year starting this fall in Brussels.

3. How long do individuals stay?

This varies, both for Italians and immigrants.  Let’s just say that on all counts things go day by day.  Within the Italian immigration system, based on European law, all asylum seekers must apply for asylum in the country where they first arrive in the EU and must wait there for their request to be processed. Because of  geography, Italy therefore hosts a large percentage of all asylum seekers coming to Europe (though a smaller percentage than many with respect to total population) simply because it is the closest point of land to Libya.  Almost nobody wants to immigrate to Italy, for bureaucratic, cultural and financial reasons, but here is where they find themselves. When folks apply for asylum it can take years and multiple appeals for a decision to come down. When it does, folks have just 30 days to either become fully independent if their refugee status is accepted or enter into deportation proceedings if it is denied.

All kinds of things create schism, including some of the specific things I mentioned related to cultural differences as well as the banal problems experienced in all community living situations.  (Some day I will write a book on the bellweather qualities of chickens and dishes in judging community health).  Here’s a subtle schism, not generally accepted or acknowledged in our house:  the term “il ragazzo” (plural “i ragazzi”) in Italian is frequently used in the way North Americans would use the term “guy” or “guys,” but with a shade of difference.  The majority of immigrants in our area are young black men in their late teens to early 20’s from West Africa. They are very commonly referred to as “ragazzi” in Italy and in our house as well.  Looking at the formal definition, “ragazzo” refers to an age between childhood and adulthood, with synonyms offered as “youth,” “lad” and “boy.” There is very little cultural conversation in Italy about how the terms we use define our perceptions, the “us” and “them,” and calling men who’ve crossed a desert and a sea to get here and improve their lives “ragazzo” is, in my opinion, a clear example of systematic racism that divides our community.

I think the most important thing this house is offering is a chance for people to meet face to face and confront cultural differences. The folks that founded the project believed this is a part of peacebuilding, and I think it can be.  At the same time, we cannot always heal the wounds we do not acknowledge. With political rhetoric heating up against immigrants as scapegoats for all of societies’ ills, we ignore many of the deeper problems rooted in Italian society.  The far right has just formed a coalition government now and day after day make grandiose, apocalyptic pronouncements about immigrants and their detrimental impact on society while completely ignoring the actual governance of the country.  Sound familiar?  In my opinion, the only way to address this is to build our capacity on the ground, turn our back on the State which will never focus on the interests of the people and instead work on mending ourselves from the bottom up.  I had a really amazing conversation yesterday with Keita about the history of Mali and recent interventions by the French since the attempted coups there which precipitated his departure.  He was not celebrating the multicultural melting pot of the French World Cup champions, and I learned a whole lot about why by just sitting and talking with him for several hours yesterday.  Could this be one possible way to mend us?

Map of migration routes taken by housemates to reach Italy (Note: this is about a year old and skews toward a large group of Pakistanis who started out in the project)

6 thoughts on “5 questions about community, 5 answers about immigration”