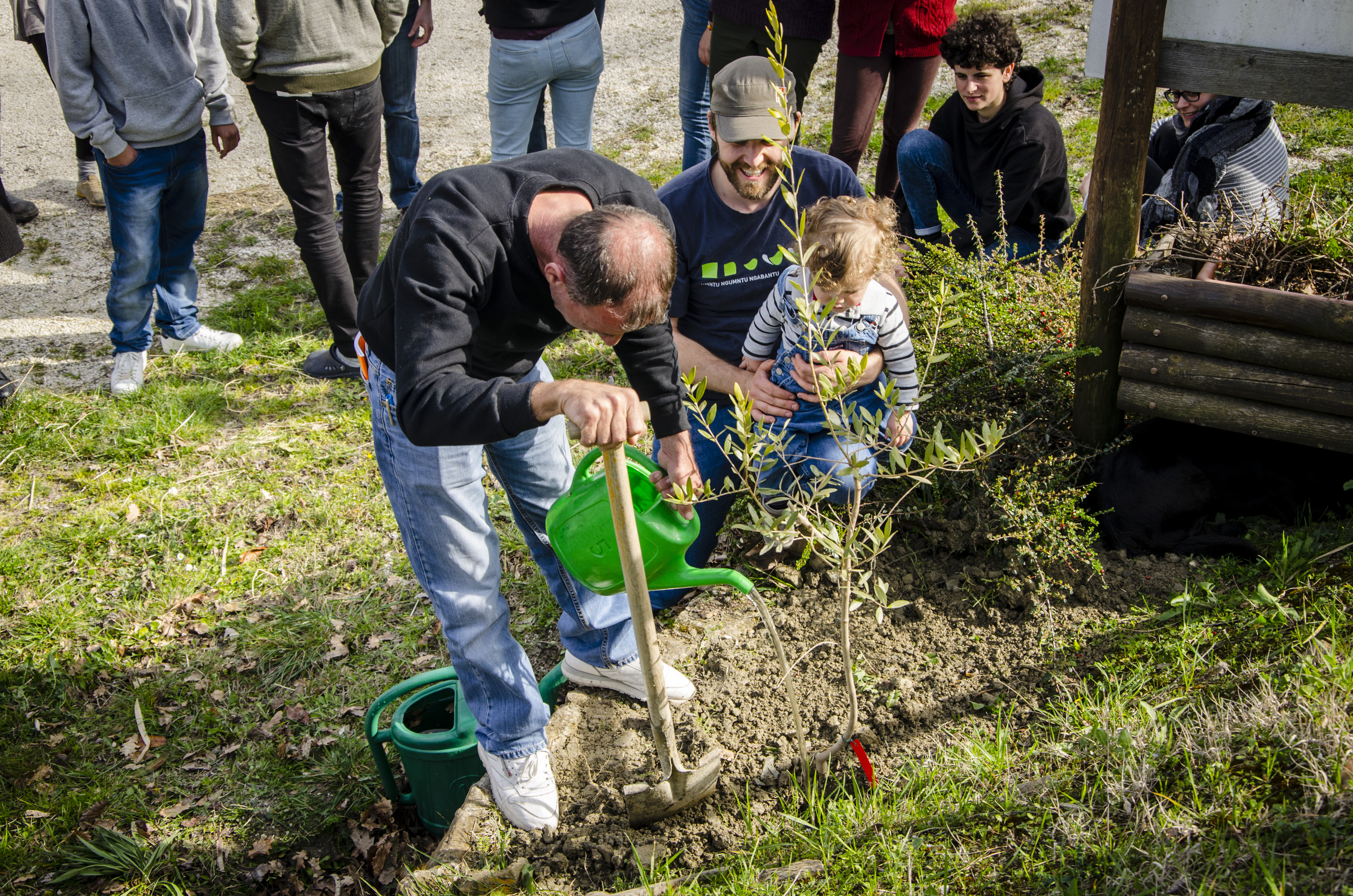 We plant an olive tree in memory of Operation Dove volunteer, Jean Emile

Our whole group of trainees. We can fit this many people at our place!

Our UpUpA team after the training. The first time we’ve all been in the same place at the same time (sans Davi) since we first began in the summer of 2014.

We joyfully began spring planting, dusting off irrigation line (Thanks Nora!), hand tools and lengths of electric fencing we use to rotate animal grazing with great expectations. Everything feels lush and the mild winter has gently given way to flush of green spring.

In the midst of this excitement we hosted a training for Operation Dove volunteers here at the farm with Hafez Huraini, leader of the Popular Committee of the South Hebron Hills in the West Bank where Fede and I first met.  Hafez is a lovely, visionary man who made time to stay at our place near the end of a tour of Italy. He came to share about his last decade of work coordinating nonviolent resistance to the Israeli occupation with his community and a growing network of Palestinian popular committees.  For those that are interested, the Popular Struggle Coordinating Committee has a very active and informative Twitter presence offering live updates on nonviolent Palestinian resistance rarely noted in the West. Little O.  hit it off with Hafez right away, fawning over his every move while trying to pilfer his cellphone. (We typically deny him screen time)  It was very satisfying to host a man who has generously offered his home to hundreds of guests and volunteers, including us, and in some small way return his gracious hospitality.

Many of you have heard about the work of our UpUpA team, a small group of us who’ve been at work for several years now planning our future together.  For the first time ever (and after our friend Davi moved into a more supporting role) the whole UpUpA group found itself at the same time in the same place in Italy. One of the early inspirations for our group came from an interest to support Operation Dove volunteers returning from extended service in conflict areas.  Hafez agreed in that need and offered to lead an activists’ self care training for volunteers, focusing on personal queries to ask ourselves about the work we are doing and how we can do it more consciously. The workshop felt like a dry run on our much longer and more ambitious training for refugee service providers planned for September.  If you haven’t had the chance to join us in supporting that effort, please do so!

It was really amazing to host a large group of idealistic, committed people here who appreciated our place and the chance to connect and share. The most touching moment of the training for me was planting an olive tree in memory of a volunteer who took his own life, publicly recognizing the struggles faced by of all of us who stand to confront injustice. Hafez quietly led the planting he has  done so many times before in his own village, this time breaking ground on new life we will cultivate and nurture with your help. I walk by the tree now twice a day as I go to feed the animals. As I do, I look at it and feel raised up and nourished as its leaves grow brighter in the sunbreaks between our spring rains.

One thought on “Fertile Ground”