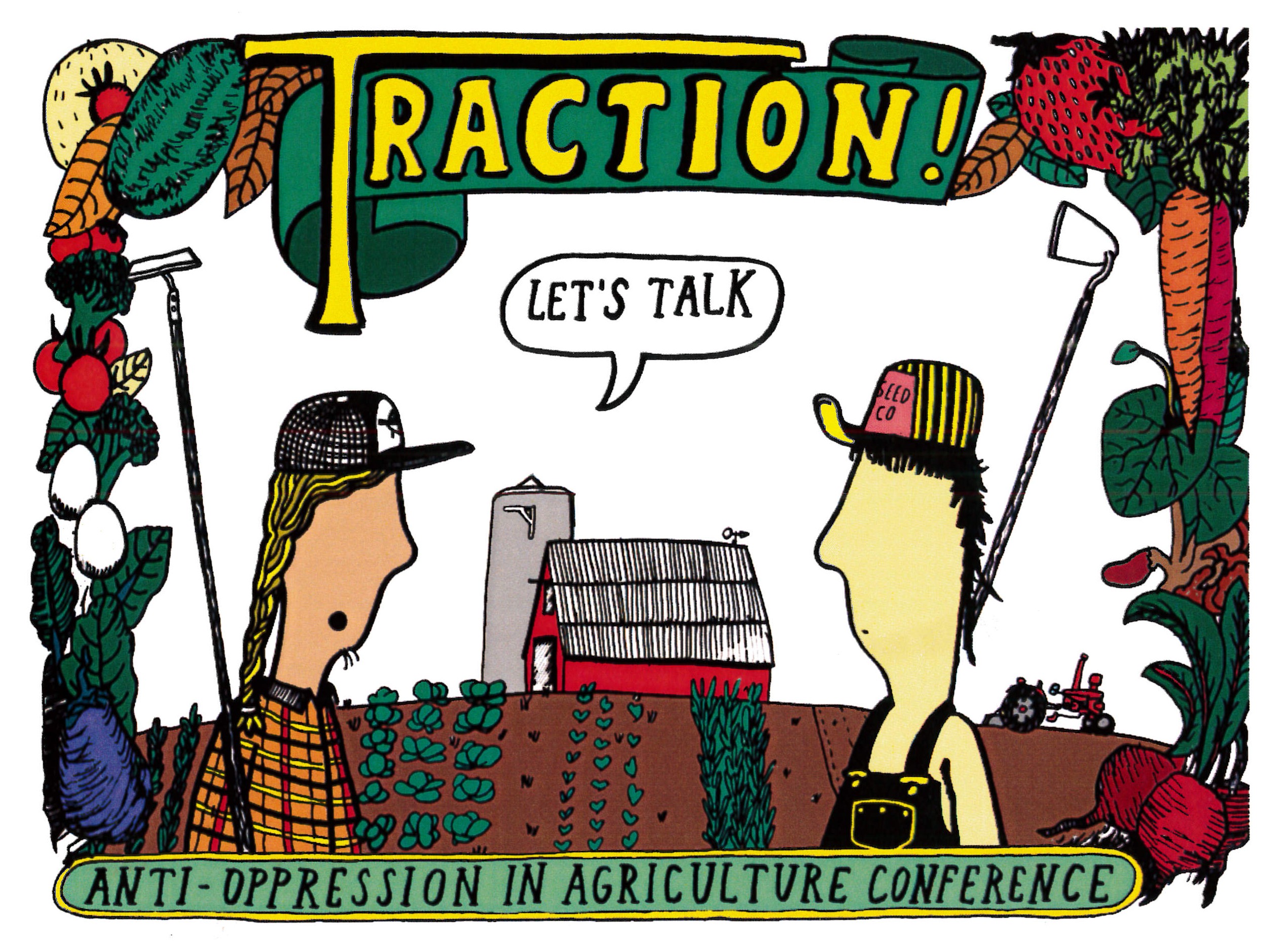 “Braccia rubate all’agricultura” translates literally as “arms stolen from agriculture.” It’s used disparagingly to mean someone who is working on lofty or intellectual pursuits is better suited for farm work. We spent the weekend with highly capable and sophisticated farmer/organizers who confirmed that those stealing arms in our food system usually have clean nails.  In the mean time, we were really inspired by the power of grassroots workers coming together and building a better economy.

We began with Traction!, “an anti-oppression agriculture academy”, for local farm workers.  25 young folks from Thurston County farms and agricultural projects spent the weekend working on root causes of injustice, unpacking personal experiences and brainstorming ways to make their farms more equitable. We sat in on conversations about the development of capitalism from feudal Europe and our agency/target status in systems of marginalization. I thought about my folks as they participated in Oregon Tilth conversations long before that organization became a large scale certification agent, imagining their faces sitting around a fire or enjoying the fresh food we were eating.  I admire their efforts to create a more just food system then too,  but how many of the same players are still co-opting the honest labor of workers today? Why do we so often ignore inequality built into our food systems and agricultural practice from the beginning? Folks at Traction! repeatedly said they hoped to carry the work forward to support each other.  Our plans to leave the country underscored a sense we were observers to the process, but obviously we struggle with many similar issues in Italy too.  We need to find common cause and keep plugging in. The business plan we’ve created for ourselves means we need to be even more conscious about accountability.

We rounded out the weekend with the annual  Enterprise for Equity micro-businesses showcase, “Homegrown,” on an incubator farm outside Rochester. With just a few more weeks of work this would have been our chance to pitch our project, but it was still fun to hear about the businesses from the class ahead of us. I chuckled as our congressman began with remarks on the Seahawks, the national economy and his 4 points critical to growth, followed by the entrepreneurs. One woman is creating custom pet clothes for “that hard to clothe pet.”  Another fellow is setting up a rendered oils (Lard!) business as studies increasingly show the benefits of healthy fats. Local economies certainly affect and are affected by the wider economy (or football?), but it’s the unique character and personal touches of individuals around the table that interest me most.  Many of the businesses

had an agricultural spin on them, including Evan of Scatter Creek Farms, working the incubator farm as practice before buying land of his own.  We chatted with him and admired his success getting produce into both the local coop and larger grocery chains.  Hitting the big time! As we left though, he mentioned that he’s still waiting on a check from that chain grocery, the one that just filed for bankruptcy a few weeks back. Maybe it’s time to reevaluate who does the heaviest lifting in a healthy, equitable local economy.